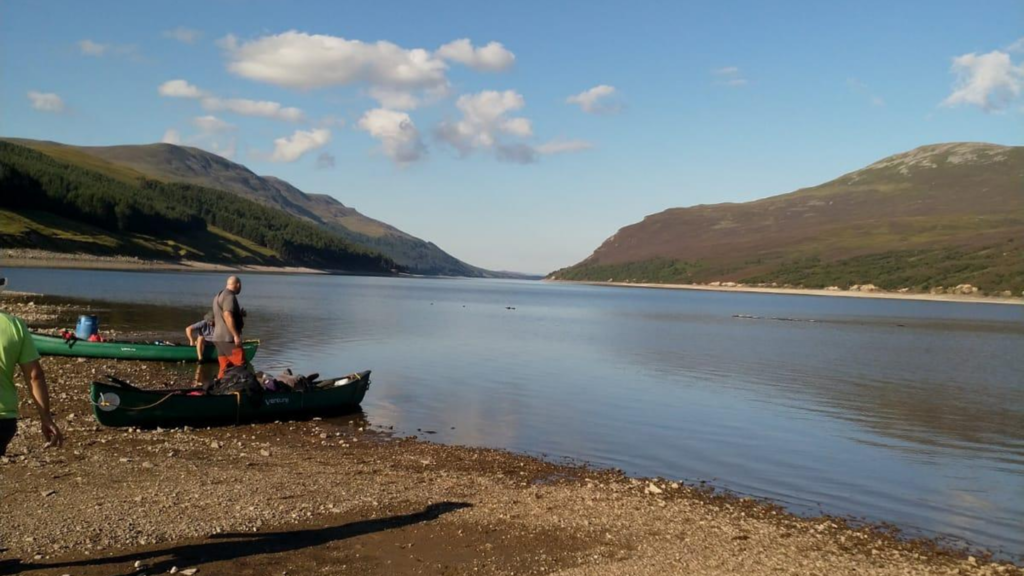 We checked the weather forecast, if correct, we couldn't have picked a better weekend for the trip as the sun will be shining on all four days.

The eight of us set off around 7 am from Walton in a long wheel base - nine seater - mini-bus with all our gear squeezed into the boot space.

We stopped off three times on the way to change drivers, and for the usual pit stops and despite a short delay due to an accident on the M6 North we made good time and arrived in Dalwhinnie around 1.15 pm where the canoes we had hired were waiting for us.

The hire company led us to our starting point and after unloading the canoes and all our gear we were on the water for around 2.30pm. The sun was shining on the magnificent scenery as predicted.

We crossed the Loch and started to look for our first campsite which gave us an excellent view of the Ben Alder Estate on our right. 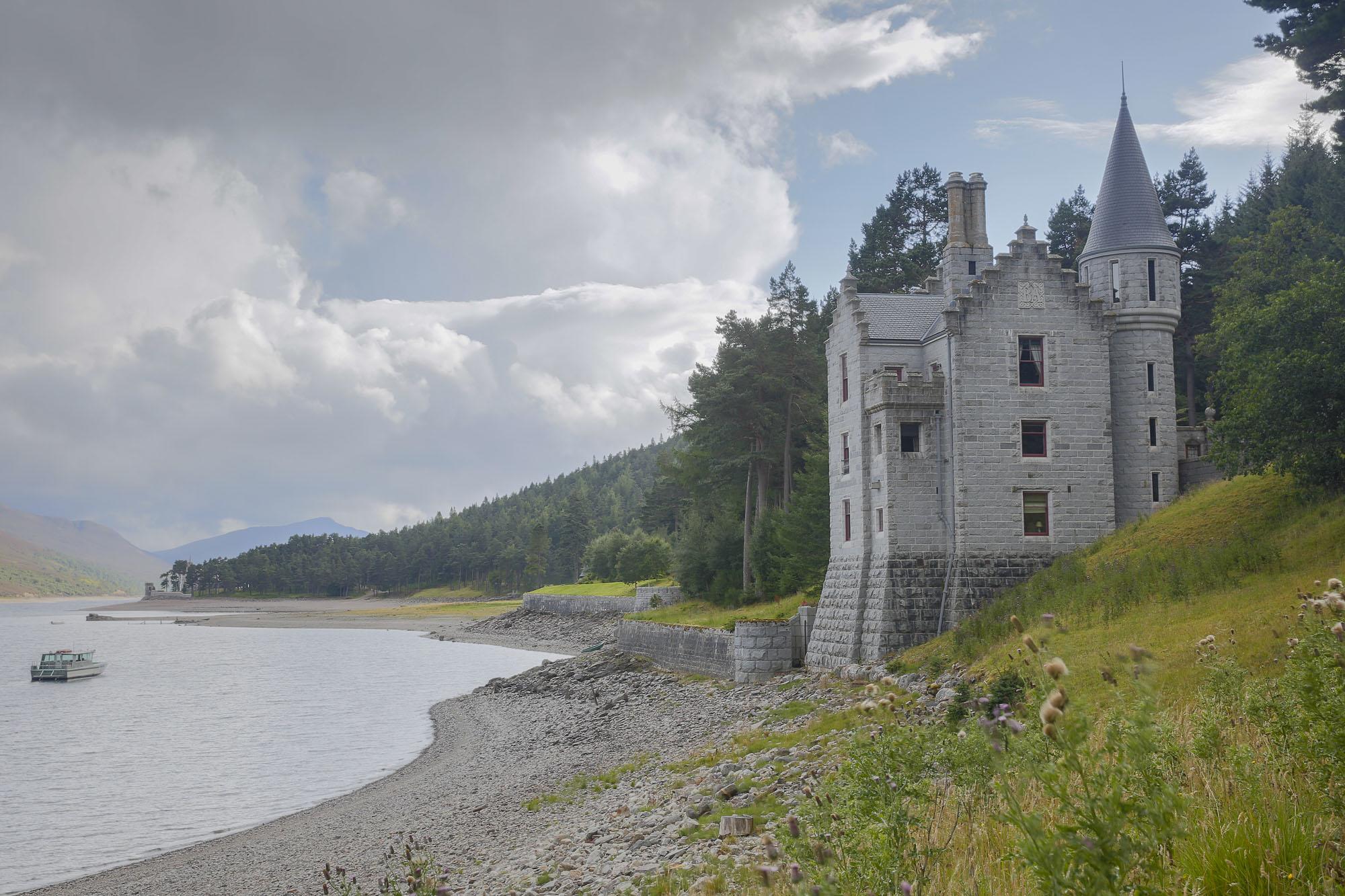 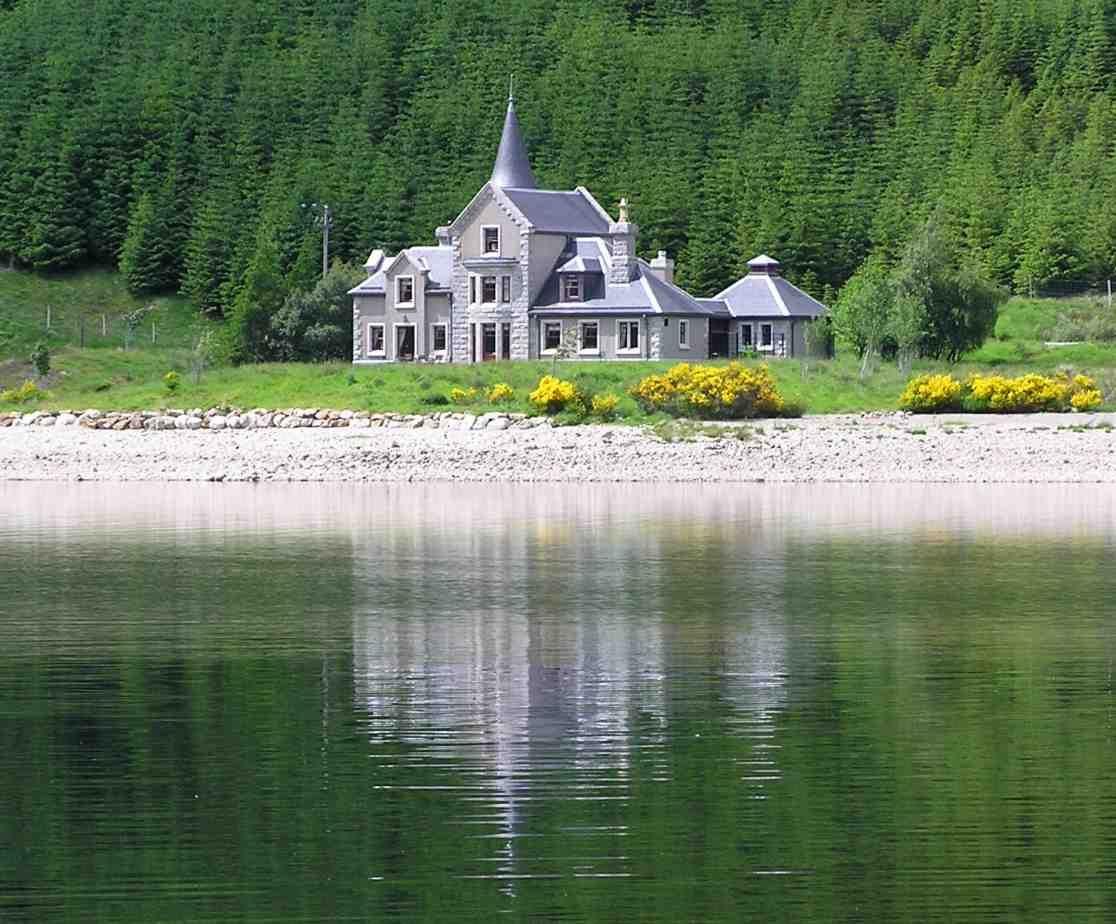 We identified a site on the Ben Alder Estate side of the Loch around 5pm and set up camp for the night, a few of us had a swim in the refreshing but extremely cold loch. 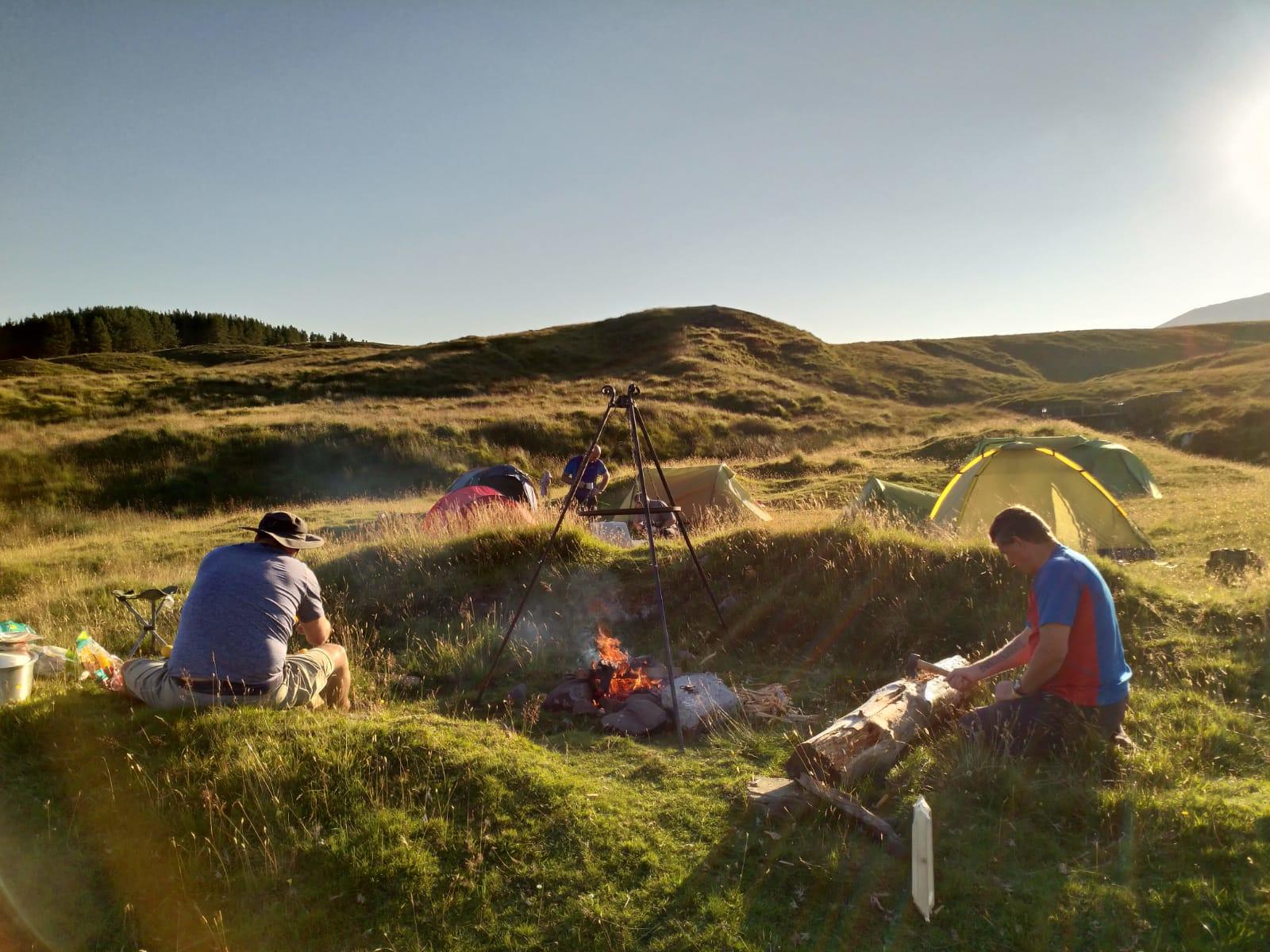 As the sun went down a sizeable amount of midges arrived at camp which was a warning for what was to come!

At around 4.30 am a swarm of midges descended on the camp looking for blood, we broke camp around 6.30 am and headed for Ben Alder Cottage where we hoped to spend our second night. The midges got their blood as we hurriedly packed up camp ensuring we took any litter with us. 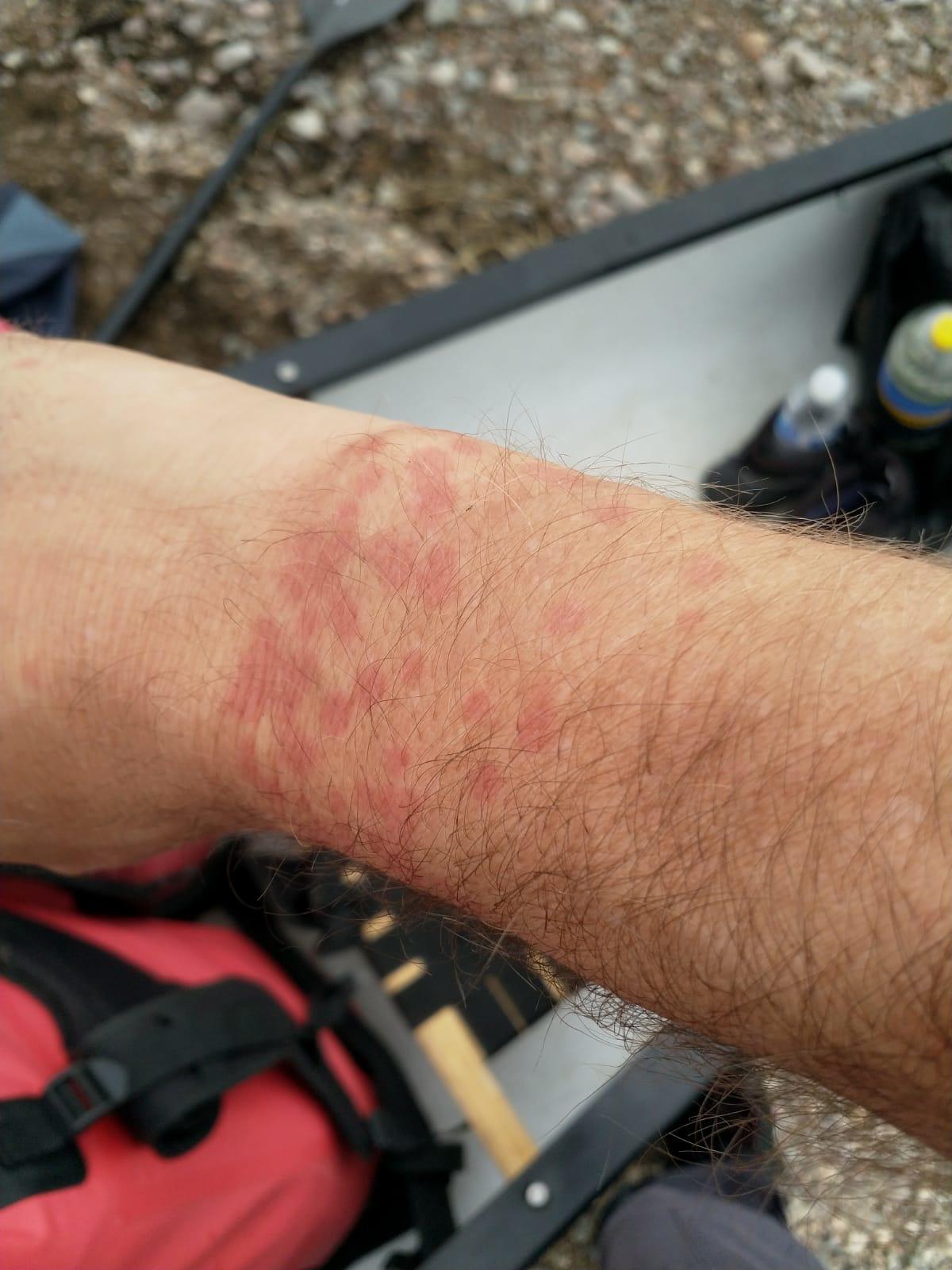 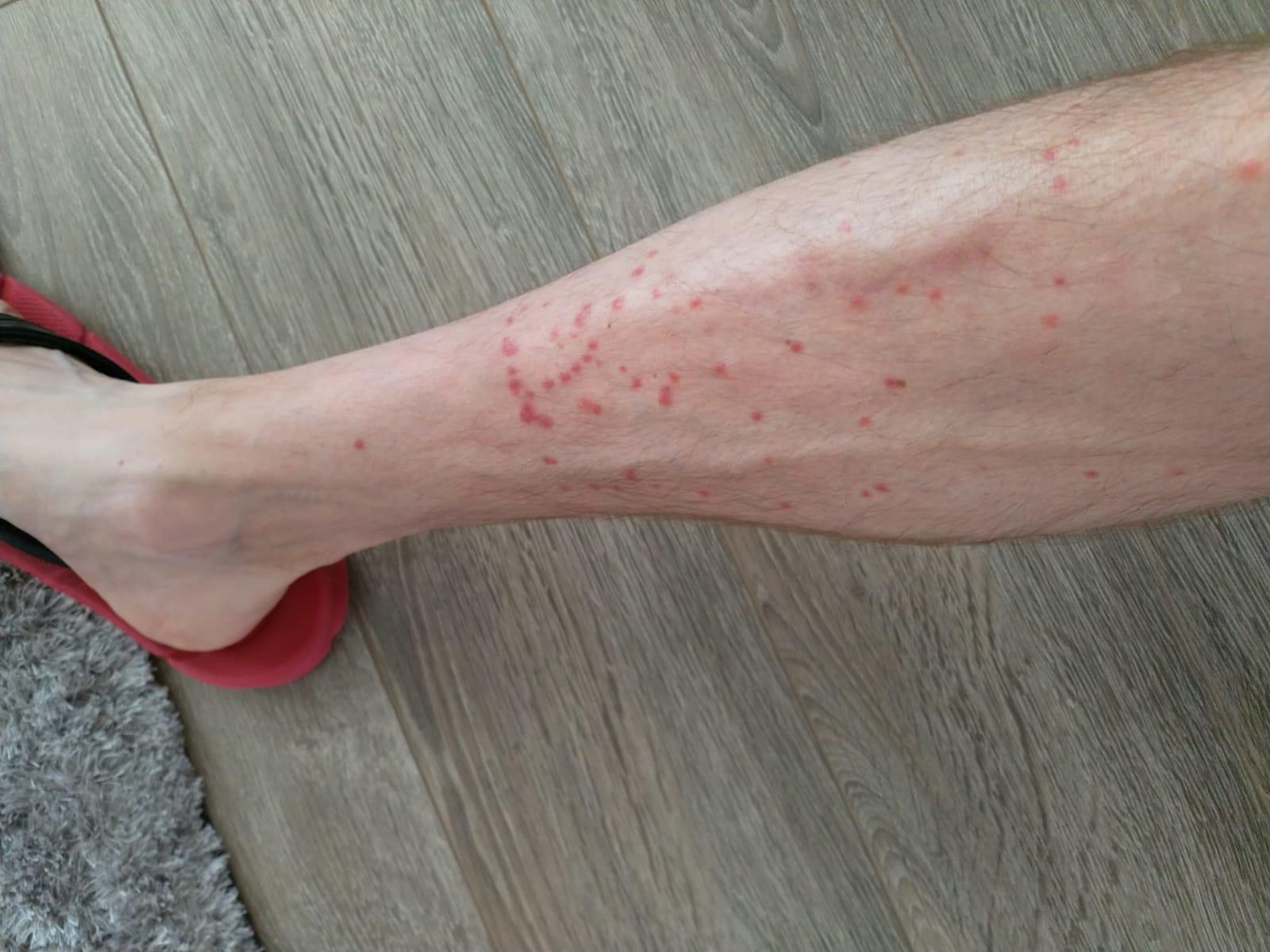 The midges were to become a feature of the trip and the head nets, midge jackets, and gloves etc definitely helped to minimise the blood loss, as did tucking our trousers into our socks, however it was virtually impossible to avoid them altogether. They definitely preferred some of us than others and the lucky ones amongst us suffered very few bites. 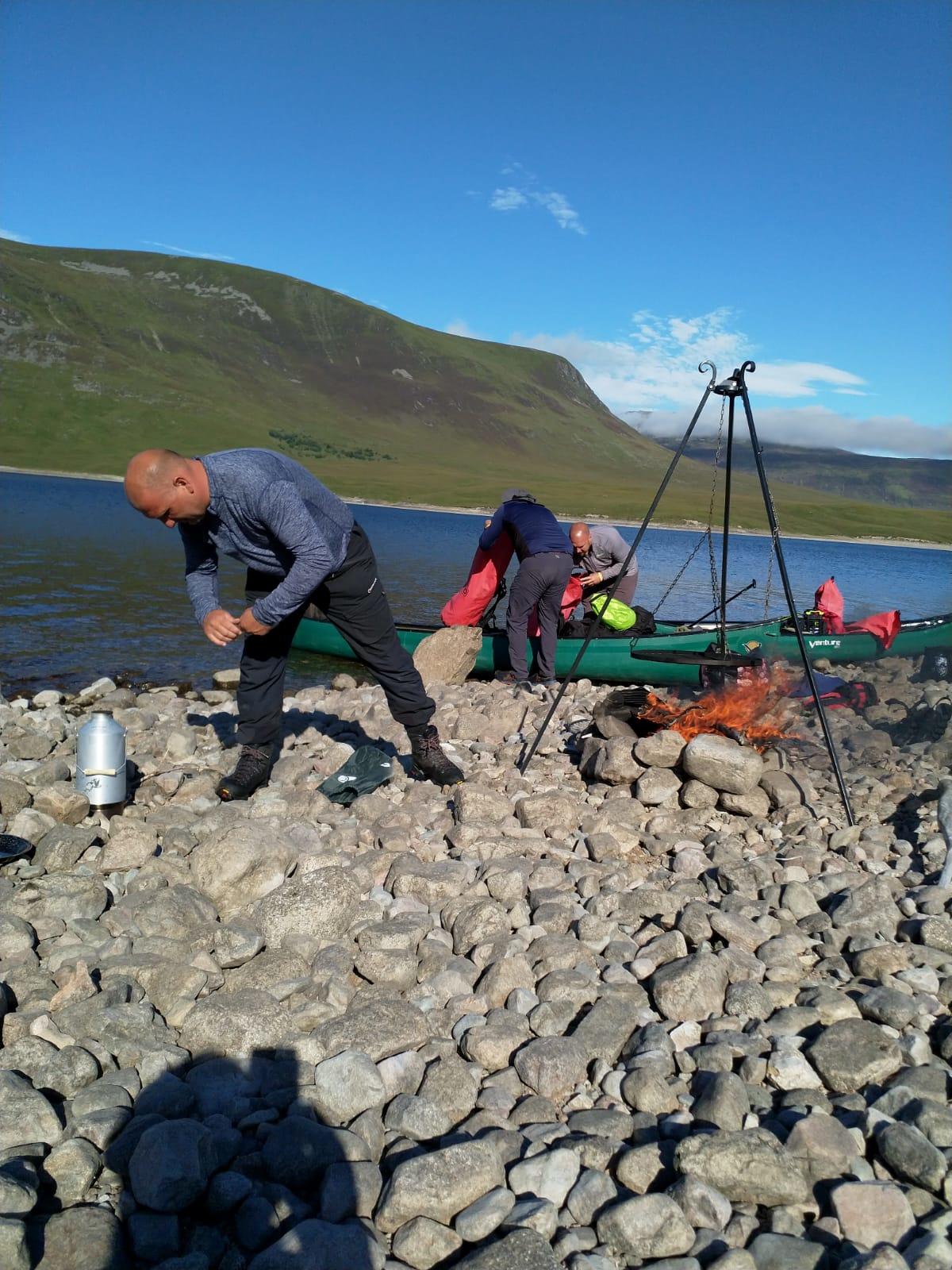 We paddled against the wind for a couple of hours to reach Ben Alder Cottage with a stop at a lovely little beach on the way. 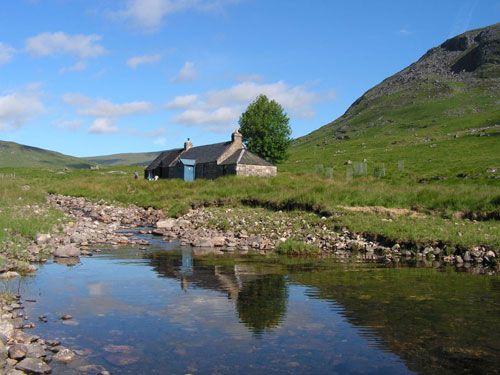 When we arrived at the cottage there were other guests and more were soon to arrive, five of us decided to set up camp on the waters edge in the hope the midges would be less prevalent and three decided to stay in the cottage (bothy).

We swam in the loch which was shallow here so not as cold and a couple of us failed to catch some trout.

After dinner we relaxed by the fire and decided to have an early night as the days paddling against the wind had taken it out of us.

We broke camp around 7 am and the midges were waiting for us but in fewer numbers.

The wind had changed direction and as we headed for the other side of the loch on our return journey we were battling the wind once again. We stopped off just before the power station for breakfast and lunch on a pebbled beach. 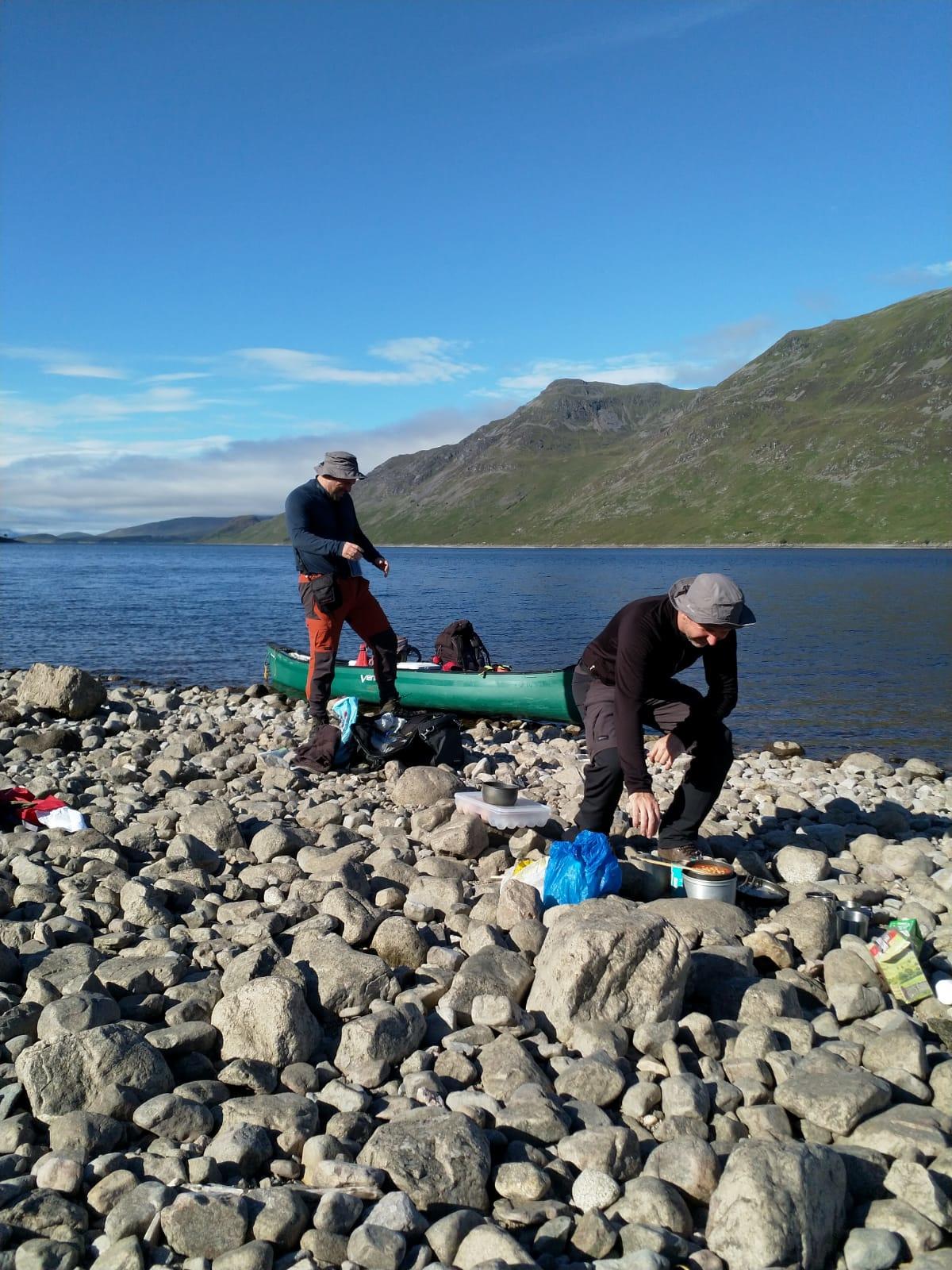 The sun was shining as a few more of us failed to catch some trout.

We set off again to find our final campsite, collecting a barrel we had previously submerged in the lake to keep its contents cold, on the way. After a short paddle we came across a pebbled beach with some shingle perfect for pitching our tents with the added bonus of lots of fire wood in close proximity.

Our final night turned out to be the best night of the trip, with a raging fire to warm us up after a cold refreshing swim and a big pan of Scouse for tea,

With the music on, a few drinks were shared and a sole fisherman had success with his spinning rod.

We rose early and with the wind against us once again we headed for the other side of the loch and the drop off point for the canoes.

The wind was the strongest it had been and we were getting a little wet as we fought against it.

It's hard to describe the peace and tranquility that you feel out on the water and also the camaraderie that exists within the group at this point, having battled the wind and one of natures swarms.

All agreed that it had been a memorable trip and that the next one couldn't come soon enough.

If you plan on visiting Loch Ericht or any other green space, please take something to carry your litter home with you as they won't stay beautiful for long if we don't. 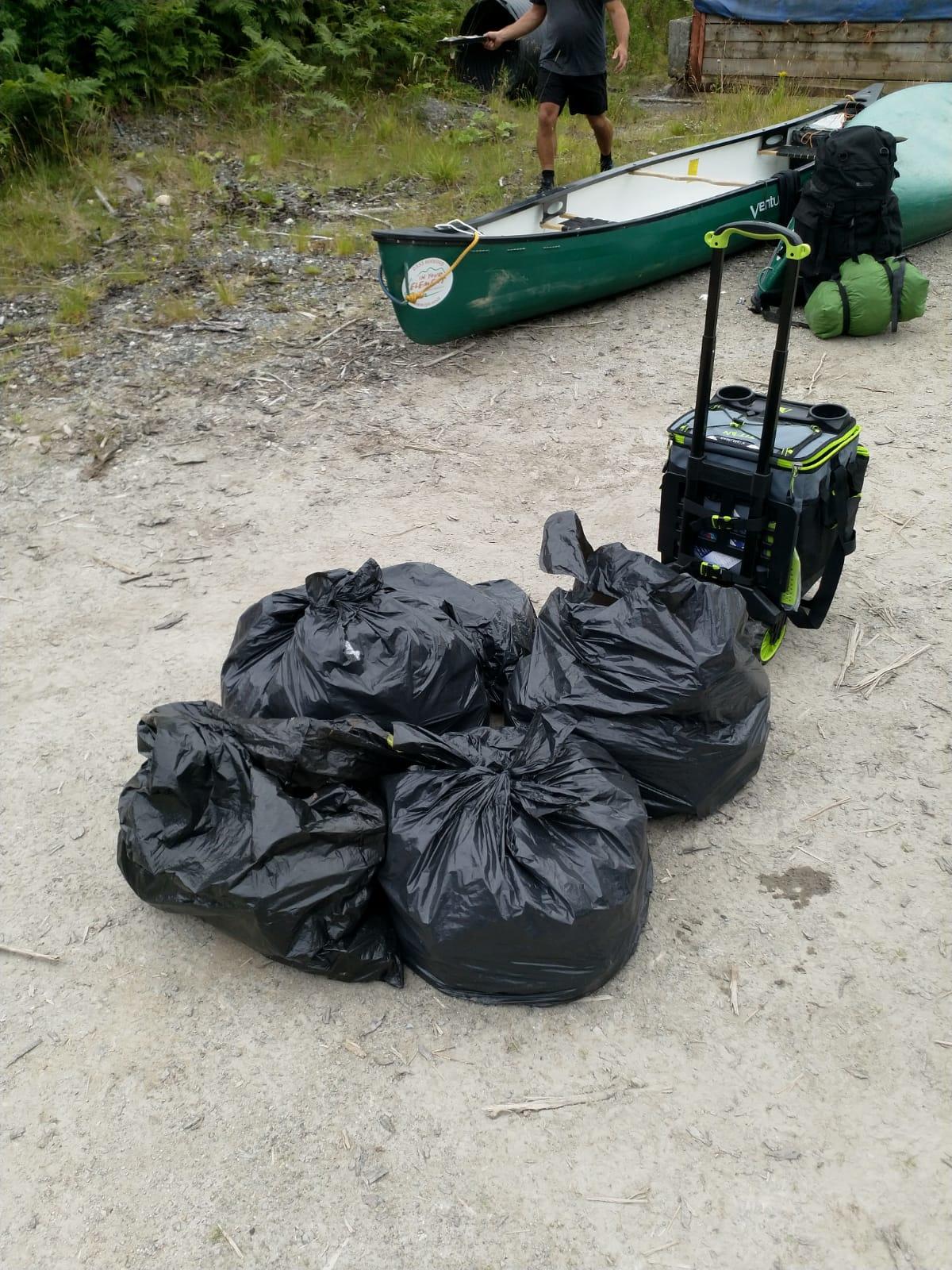